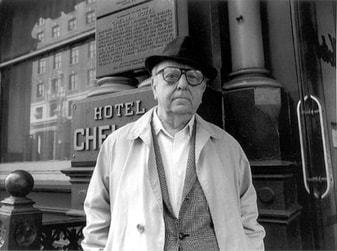 ​There’s no question Thomson ranks among the masters of 20th Century music, yet his delightfully accessible compositions, hauntingly resonant of the American prairie, are all too forgotten.

Thomson was the first to weave an authentic American "voice" into symphonic music, drawing upon blues, brass bands, cowboy tunes, and Baptist hymns he heard growing up in Kansas City as the foundation for his masterpiece, "Symphony on a Hymn Tune," and the New-Deal era documentaries, The Plow That Broke The Plains and The River.

Such traditional sources likewise inspired his brilliant music for Louisiana Story, which received the first Pulitzer Prize ever awarded a film score. In such works, Thomson not only defined the American orchestral sound but the cinematic soundtrack itself, an influence that remains to this day.

Virgil Thomson is also celebrated for his now-legendary operatic collaboration with Gertrude Stein, Four Saints In Three Acts, which was groundbreaking for form, content, and its all-black cast.

And as the powerful music critic for the New York Herald Tribune, his erudition, wit, and never-subtle judgments issued the challenge to America's orchestras and opera companies to become what are now institutions of international prestige.
​
Produced for PBS/American Masters by Gather Media and Paulson Productions.